Gubernatorial candidate and 2013 Pulitzer Prize finalist Juliette Kayyem will be the featured speaker at the annual luncheon of the Massachusetts Newspaper Publishers Association on Thursday. 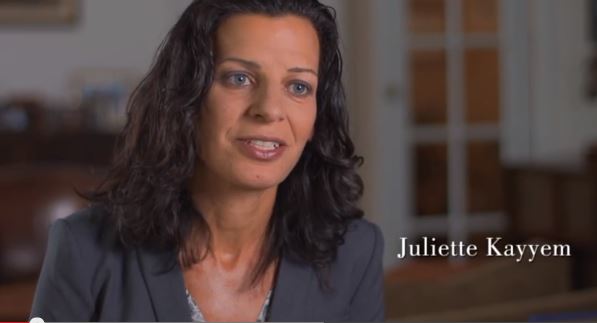 Until launching her campaign for governor, Kayyem was a columnist for the Boston Globe, analyst for CNN, and lecturer at Harvard’s Kennedy School of Government. In 2013, she was a Pulitzer finalist for her series urging the Pentagon to end its female combat exclusion rule – a prohibition the military has since lifted.

Kayyem began her professional career in the Clinton administration as a civil rights attorney, litigating cases involving the rights of children. She helped bring the first federal anti-bullying case and was part of the team that argued for The Citadel and VMI military institutions to open their doors to women.

She then moved into public safety and homeland security, serving as Gov. Deval Patrick’s homeland security adviser. After several years overseeing the 8,000-plus member Massachusetts National Guard, the Commonwealth’s strategic security planning, and the distribution of homeland security funds, she was tapped by President-elect Obama to be part of his transition team and then became assistant secretary for Intergovernmental Affairs at the Department of Homeland Security.

As assistant secretary, Kayyem was responsible for coordinating planning between the federal government and all of its state, local, and territorial partners on issues as varied as immigration, intelligence sharing, military affairs, immigration reform, and the response to crises such as H1N1, the Dec. 25 attempted terrorist attack, the Haiti earthquake and the BP oil spill. For her exemplary leadership in the wake of the BP spill, coordinating 60 federal agencies over five states, Kayyem was awarded the Coast Guard’s highest civilian honor.