Please join us for the annual meeting of the Massachusetts Newspaper Publishers Association on Thursday, Nov. 29, 2012, at Anthony’s Pier Four in Boston. A registration form is available by clicking here. 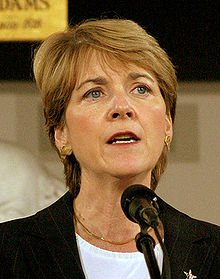 Massachusetts Attorney General Martha Coakley will be the featured speaker at this year’s luncheon. Re-elected to her second term as attorney general in 2010, Coakley previously served for eight years as district attorney in Middlesex County. Earlier, she was chief of the Child Abuse Unit in Middlesex. She began her legal career in 1979, practicing litigation at the firms Parker, Coulter, Daley & White and later at Goodwin Proctor. She joined the Middlesex DA’s office in 1986 and also served on the U.S. Justice Department’s Organized Crime Strike Force.

The luncheon, which begins at noon, is also your annual opportunity to meet with newspaper publishers, editors, reporters and business staff from throughout Massachusetts.

The meeting is open to anyone who would like to attend. Registration, which includes lunch, is $75 for MNPA member newspapers and their employees, $85 for all others.

The registration form is may be downloaded by clicking here. If mailing your registration without the form, please indicate the name of each registrant and the registrant’s choice of luncheon entrée: Chicken Chausseur or Broiled Scrod.

If you have any questions about the event, please address them to MNPA Executive Director Robert Ambrogi, (978) 546-3400, or info@masspublishers.org. Registration deadline is Friday, Nov. 23.

We look forward to seeing you on Nov. 29.